How Coffee Gets Decaffeinated

The Ultimate Guide to Coffee > Coffee Processing > How Coffee Gets Decaffeinated

How They Make Decaf Coffee

On this page we’ll walk you through the process of producing decaf coffee, which really just consists of removing the caffeine from the coffee beans at critical phases of processing. The process was originally invented by Ludwig Roselius in Germany around 1905, but has evolved since that time.

We'll describe the current methods of removing the caffeine to give you a good understanding of how they work and what the key differences are.

Many of the positive effects of coffee can be attributed to the caffeine found within. That said, there are in fact many other chemical compounds that can be found in coffee that are equally beneficial to consumer’s health.

The demand for Decaf coffee is perfectly understandable as there’s a large segment of passionate coffee lovers who for various reasons might need to avoid caffeine entirely. For instance, in the United States it's estimated that decaf coffee consumption represents around 10% of the overall coffee market.

Caffeine can contribute to a range of negative effects, after all.

Some problems caused by caffeine include insomnia, anxiety, increased heart rate, muscle tremors, and for some people the addictive quality of caffeine is reason enough to avoid or minimize their intake.

With decaffeinated coffee, people can enjoy much of the coffee flavor while avoiding the risk of many of the potentially negative effects, including sleep disruption.

Coffee is decaffeinated through four principal methods. Two of those methods use solvents.

Coffee beans are steamed for 30 min and then rinsed over and over for several hours with a liquid solvent called ethyl acetate. The chemical process here is explained as the solvent binding to the caffeine molecules with each rinse.

This process is referred to as the “direct variant”.

In the “indirect variant” the beans are actually soaked in hot water for several hours. After they’ve had time to soak the coffee beans are removed from the water and then solvent is added which, once again, binds to the caffeine.

In this variant the solvent is heated until it evaporates (along with the caffeine it was binded to).

In either variant, once the beans have been fully treated with the solvent they are left to dry until they achieve the ideal level of moisture and are ready to be processed.

In this method the start of the process consists of soaking the coffee beans in hot water with the goal of opening their pores. 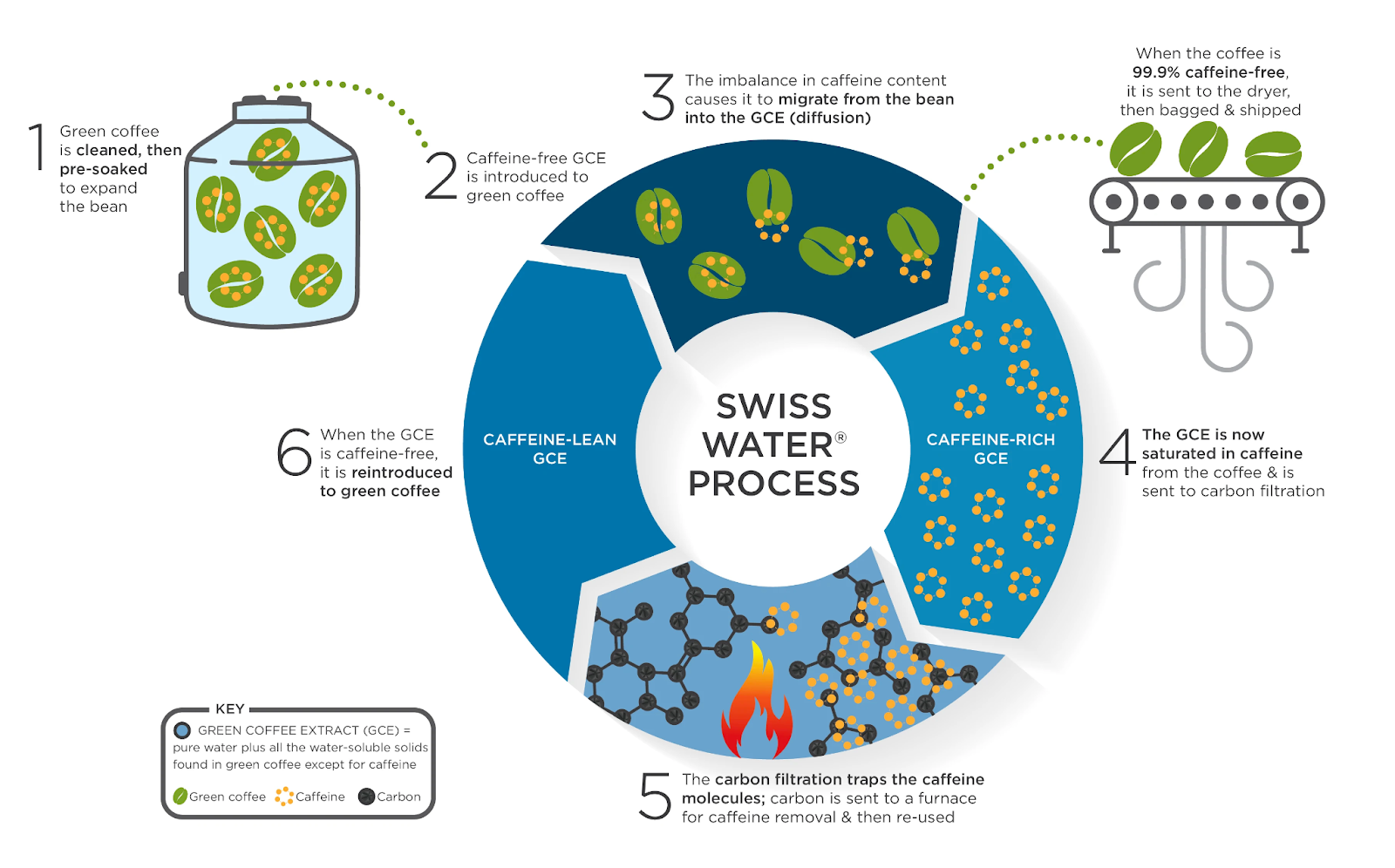 The Swiss water method was birthed in Switzerland sometime around 1933. However it was truly commercialized and employed at a meaningful scale in the 80s.

The method allowed coffee roasters to remove most of the caffeine from the beans without using solvents or additional chemicals.

Once the method became possible to employ in a commercially viable way it started being used in large scale coffee production with quite a bit of popularity.

The method, like many other decaffeinating processes, begins with soaking the coffee beans in hot water. This part of the process begins separating out the caffeine as well as other constituents like oil and some flavor molecules.

Those other elements will ultimately need to be returned to the coffee bean (except they need to be reabsorbed without the caffeine).

To accomplish the reabsorption, the water needs to be passed through a charcoal filter designed to stop the caffeine molecules which happen to be larger than the others. This allows the smaller flavor molecules to pass through and remain in the water.

The beans then just need to be transferred back to the filtered water where they can absorb the flavor molecules before they are processed further.

Unlike solvent methods, the caffeine can’t be extracted and reused as it remains “stuck” on the carbon filter.

You can learn more about the process through this video that SwissWater Decaf put together:

Brewing decaf coffee is very similar to brewing regular coffee, but there are a few key differences that you'll want to keep in mind.

The first thing to remember is that decaf coffee grounds are much more absorbent than regular coffee grounds, so you'll need to use less water when brewing. The reason they are less absorbent is because the decaffeination process removes some of the oils from the coffee beans, and these oils are what help the grounds to retain water.Another difference you'll notice is that decaf coffee takes longer to brew than regular coffee. This is because the decaffeination process makes the coffee beans more resistant to heat, so it takes longer for the water to extract the flavor from them.

When brewing decaf coffee, it's important to use a coarser grind than you would for regular coffee. This is because the coffee grounds need more surface area to release their flavor. If you use a finer grind, the coffee will be over-extracted and taste bitter.

The first decaf process that could be used at commercial scale was actually invented by Ludwig Roseilus in 1900.

Roselius filed for a patent in 1906. The patented process included the use of hydrocarbon solvents to treat the green coffee beans.

By 1912 he was one of the leading promoters of decaffeinated coffee that he branded “Sanka”, a name inspired by the French phrase for decaf which translates to ''sans caffeine.”

Is decaf coffee any healthier?

Decaf has most of the same health benefits as regular coffee (presense of antioxidants, lowering risk of Type 2 Diabetes), but reduces caffeine related side effects.

Is decaf coffee full of chemicals?

Even when using a solvent method the presence of additional chemicals in decaf coffee is typically very low. Once point of concern is that some methods might use methylene chloride which can be harmful, although the FDA concluded that trace amounts of the chemical would have very low to zero risk of any side effects.

What are the four main methods for decaffeination?