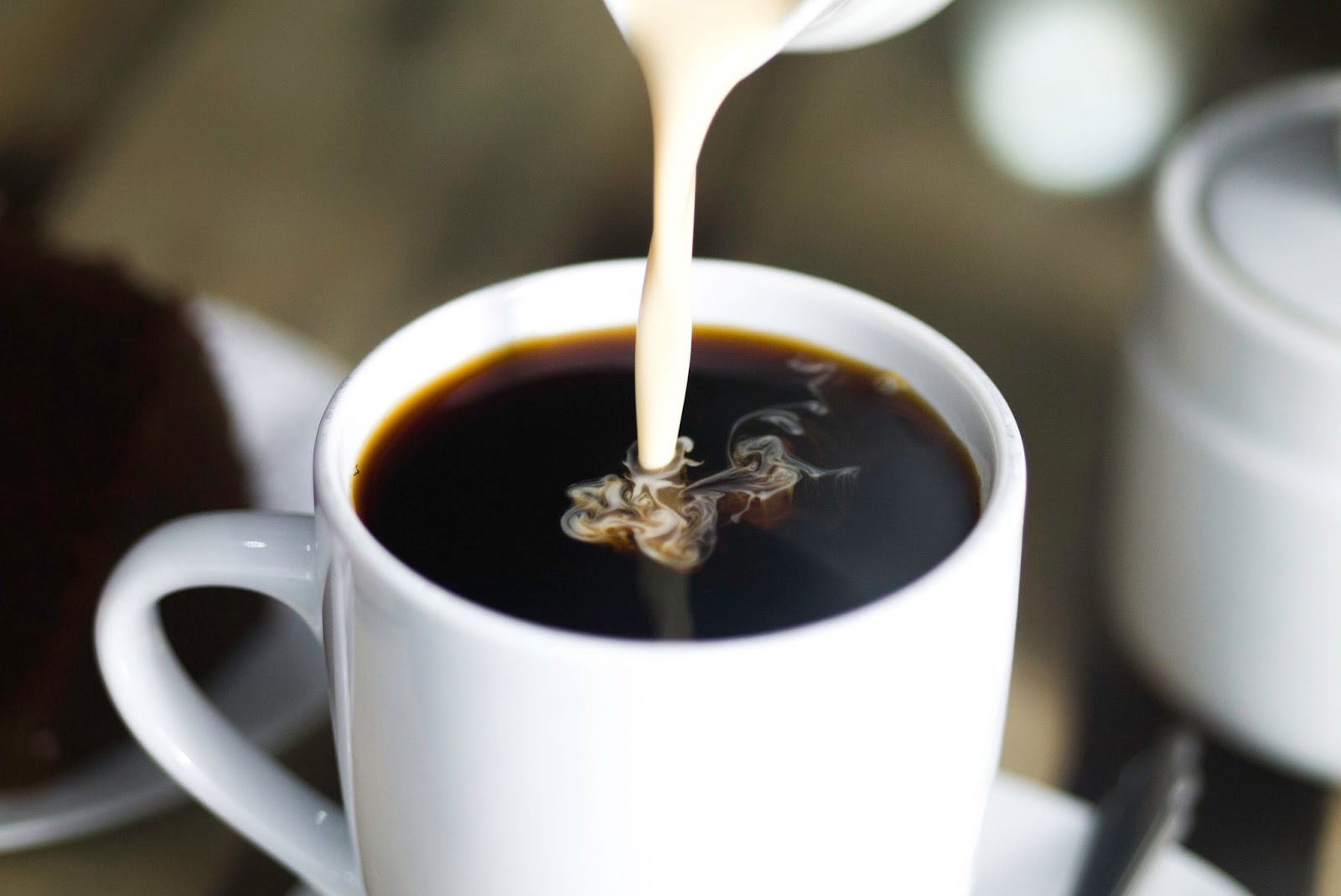 On this page we will give you a firm sense of how milk is used to enhance and balance coffee and detail it’s many effects on the texture and flavor of coffee at both a general level and in a more specific chemical way. We’ll also guide you through the science behind milk frothing and show you how to properly froth milk.

The addition of milk to the coffee changes the content of its nutrients in a way that can offset some of the negative health effects of coffee. For instance there is an increased risk of osteoporosis that can be caused by drinking caffeinated beverages, so milk is the perfect antidote to this phenomenon.

Of course, milk also provides health benefits on its own, since it’s a complete protein and a source of other important nutrients like calcium.

There are three milk constituents that are important to understand as they have a significant impact on the coffee. Those constituents are Fats, Proteins, and Lactose.

The fats in milk are an important part in giving the coffee a fuller more rounded feel.

This is why milks with a higher proportion of fat will result in a more full flavor profile and a coffee drink that tastes richer overall.

Alternatively, milks with lower fat will create more foam, because the ratio of fat to protein is lower.

The proteins found in milk are what we can attribute the foaming to. As the proteins are heated to roughly 60 degrees they coat and stabilize, producing air bubbles that are ultimately introduced through the steam wand.

If you ever wonder what determines the sweetness of the milk look no further than Lactose.

Lactose is less soluble than sucrose which initially makes it less sweet, but once the milk is heated up it becomes more soluble and the sugars break down which in turn increases the sweetness of the milk.

How to Properly Froth the Milk 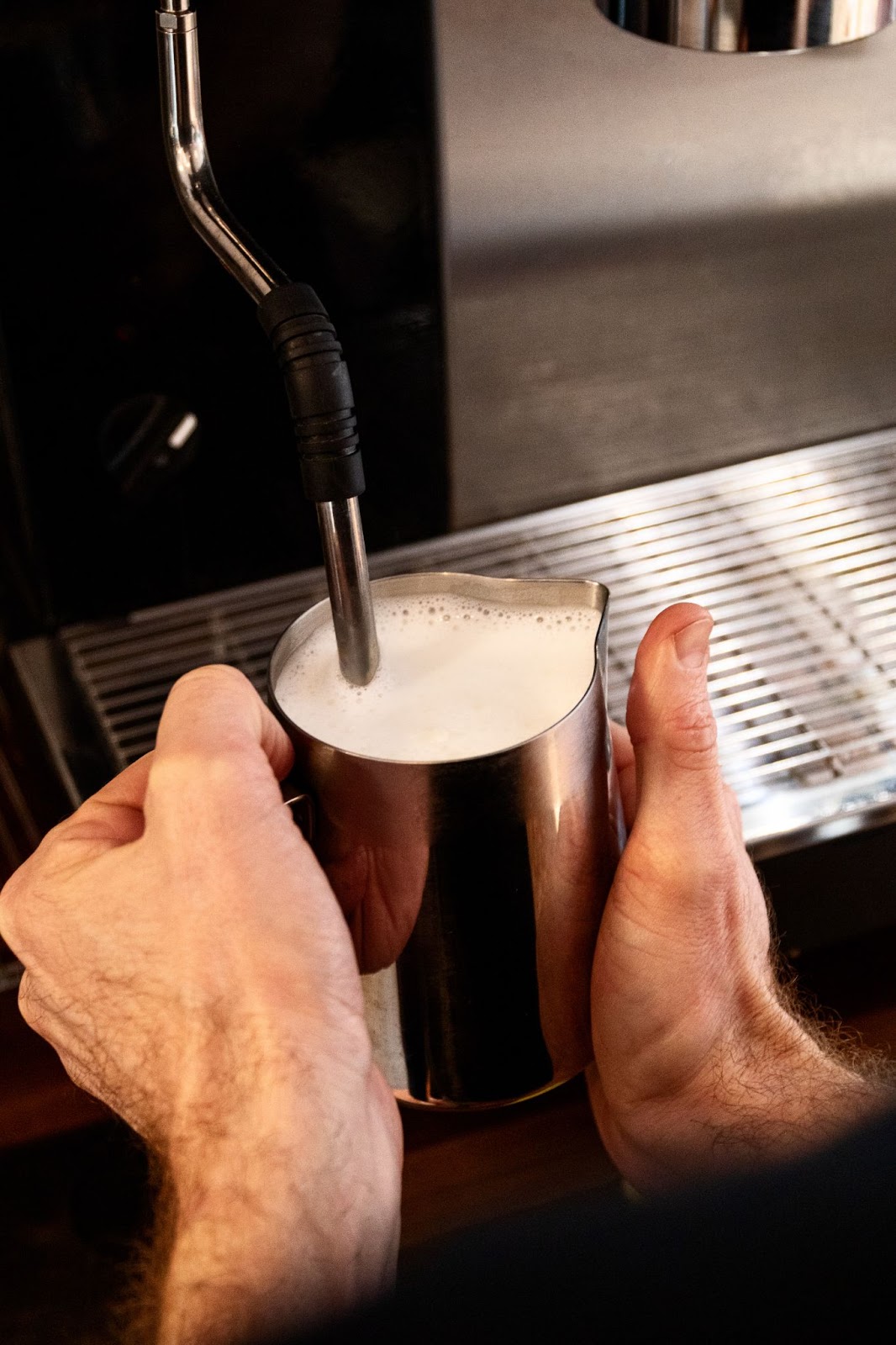 First, you want to take milk that is chilled, meaning straight from the refrigerator. The milk needs to be fresh as the older the milk is the more difficult it will be to achieve a proper foam.

The milk should be poured into what’s called a “frothing jug” right up until the pouring spout.

Then, the steam wand should be inserted just below the top surface of the milk at an angle. The milk will move in a whirlpool motion - a technique called stretching.

It’s this “stretching” that generates the microfoam by letting air into the milk.

Once the milk has reached body temperature - which can be checked by placing your hand on the side of the jug - then we no longer want to insert air into the milk.

The position of the steam wand should be lowered further into the jug. This technique will create more texture to the milk and increase the temperature without inserting air.

The milk should continue to be moved in a whirlpool fashion, this time with a more submerged steam wand. Tilting the jug while frothing will add more texture until the jug heats up to about 60 degrees.

Once the milk is fully heated you’ll need to tap the jug gently to dissolve and pop the larger bubbles. The milk should be left to rest for a few minutes.

When you’re ready to serve the milk should be swirled around in the jug to make sure it is mixed in a consistent fashion.

The end goal is to have the milk looking consistent, smooth, and a little shiny.

Before leaving off the subject we'd be remiss not to mention the role milk can play in crafting latte art. The following video from Seven Miles Coffee Roasters does a good job showing how it's done:

It might surprise you to learn that the fat in milk isn’t what causes it to foam when frothing. Even low fat milk can be made to create a strong foam. That said, whole milk does tend to produce a reliably soft textured foam that easily floats above the surface of coffee. It lends itself more to style and latte art.

What are the best types of milk to froth?

Non fat or low fat milk will produce the most visible foam “bubbles” and tends to be easy to froth.
Whole milk, while more difficult to control, tends to produce a more robust and rich froth which adds more to the taste.

What causes milk to froth?

Simply put, the water vapor being forced into the milk while it’s heating is what causes it to froth.